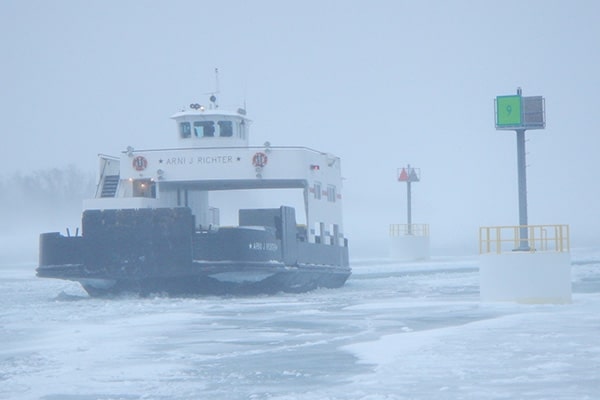 “We’ve been exclusive Twin Disc users for generations,” says Hoyt Purinton, ferry line president. “When the boat has to get through, you need a transmission you can rely on.”

More than 700 year-round residents, as well as thousands of summertime visitors, depend on the ferry line for transport, mail and package freight. The line makes about 5,000 trips a year across Death’s Door Passage—a half hour one way in summer, and 45 minutes or longer in harsh winter months.

Twice-daily winter trips have been handled by the Arni J. Richter, built in 2003 with essential ice breaking capabilities. “We’ve had ice to the bottom in 30 feet of water, with ice coming through the propeller the entire trip,” says Hoyt Purinton, ferry line president. “It’s an unholy noise.”

With the ferry line’s entire winter operation riding on the Richter, Purinton says, “it was time to put another horse in the barn.”

Enter the m/v Madonna—at 124 feet long and 40 feet across the beam, the fleet’s largest vessel and the third to be built by Fincantieri Bay Shipbuilding. Set to launch in summer 2020, the Madonna can carry up to 28 vehicles and 150 passengers.

Like the Arni J. Richter, the Madonna is equipped with the Twin Disc MG-540 transmission—so rugged and dependable, Purinton says, that “some of our crew members joke about naming their kids ‘Twin Disc.’”

The Madonna also includes Twin Disc EC300 electronic propulsion control, featuring single-lever control of engine RPM and transmission engagement. “It’s important to have a vessel that can start and stop on a dime,” Purinton says.

Distributor Palmer Johnson, the ferry line’s service partner and yet another local provider, recently upgraded the Richter’s controls from the Twin Disc EC250 to the EC300. Says Purinton, “We’ve seen gains in torque and responsiveness, and built in further safeguards to the transmission itself.”

And based on the decades of reliable performance the fleet has enjoyed with Twin Disc transmissions, Purinton expects the Madonna to enhance efficiency for years to come. “People who haven’t even been born yet will benefit from that boat and its robust driveline,” he says.